The 5 Best Casino Films to Inspire Your Game

Whether you’re a card shark or not, there’s an element of casino films that touch the thrill seeker in all of us. From card counting to life-or-death poker games, here are the top five casino films that any gambling fan must watch. You might even pick up some tips along the way…

Bond always knows how to get himself out of a sticky situation, even at a poker table. This 2006 re-make, starring Daniel Craig, sees Bond up against terrorist bankroller Le Chiffre in a deadly game of Texas Hold’Em.

In order to stop Le Chiffre securing the money for his clients, James Bond is sent to play the game and stop the villain from fleeing. With a lady to impress and international security to protect, Bond enters into one of the most intense poker games of his life.

A lesson in playing your cards close to your chest…

One of Martin Scorsese’s most well-known films, Casino reveals the gritty underbelly of a Las Vegas casino.

Sam ‘Ace’ Rothstein (Robert De Niro) is the successful pit boss of one of Vegas’ biggest casinos, living the dream and making his millions. When childhood mobster friend Nicky Santoro (Joe Pesci) comes to work for him, the glitz and glamour of casino life soon unravels. One to watch for the hardcore duality of the casino lifestyle.

Tip for casino bosses: keep your friends close and your enemies closer.

“I was so good that when I bet, I could change the odds for every bookmaker in the country” –Ace Rothestein 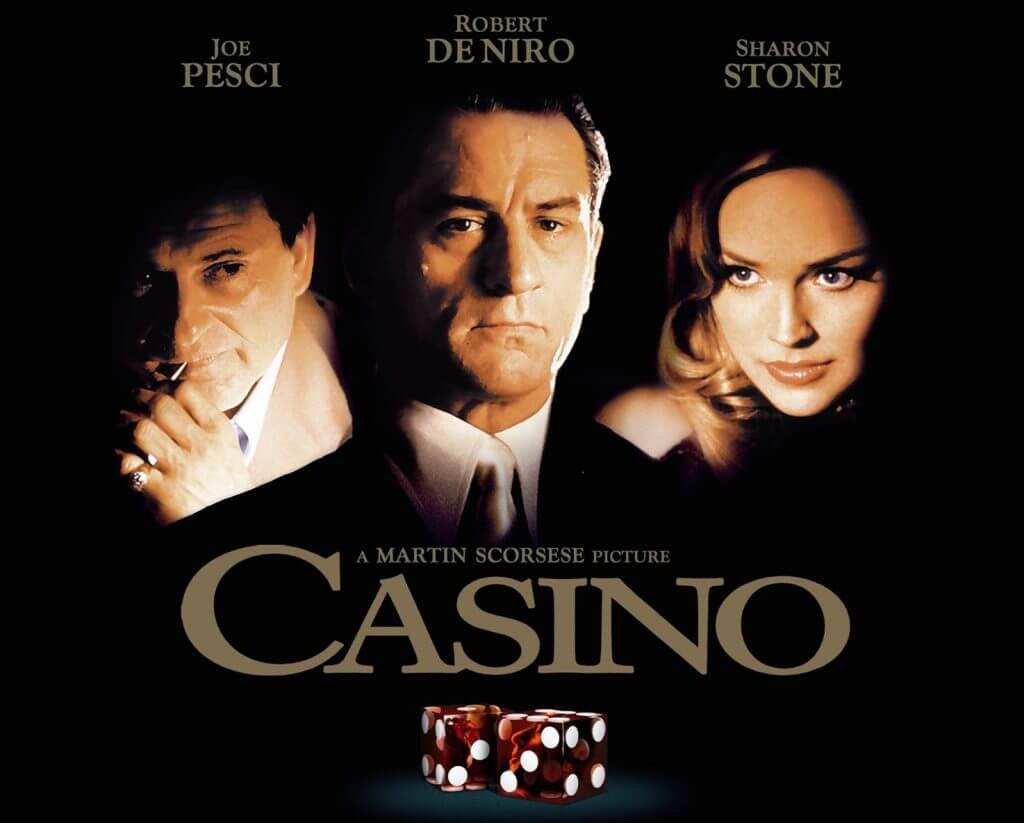 One of the most popular casino-themed films of the 21st century, Ocean’s Eleven brought the thrill of the heist to the craps table.

Hoping to pull off the biggest coup in the business, Danny Ocean (George Clooney) targets rich and powerful casino overlord Terry Benedict. Not only does Ocean plan to rob Benedict of three casinos’ worth of money, he’s also swiping his ex-wife Tess (Benedict’s current girlfriend) from him. While you might not be tempted to pull one over on a casino tycoon, that now-legendary fountain scene will have you buying your tickets to Vegas.

One thing any gambler can learn from this casino film — always think one step ahead!

A bright law student with a talent for poker, Mike McDermott (Matt Damon) gets in over his head with Russian mobster Teddy KGB (John Malkovich).

McDermott vows to avoid trouble and the poker table, and succeeds, until childhood friend Lester “Worm” Murphy (Edward Norton) gets released from prison. With mounting debts and pressure from the same Russian card shark, McDermott is forced to gamble on behalf of his friend.

This insane card throw-down has become legendary amongst poker fans. Yes, we all wanted to school someone like this…

“I want him to think that I am pondering a call, but all I’m really thinkin’ about is Vegas and the Mirage” – Mike McDermott

For all the wannabe card counters out there, Rain Man is your go-to inspiration.

Spoilt yuppie Charlie Babbit (Tom Cruise) is disgruntled after his father’s will leaves him nothing but rose bushes. After meeting his older brother, austic savant Raymond (Dustin Hoffman), he realizes how he can get rich quick.

Using Raymond’s gift, the pair count cards to win big at the blackjack table. Rain Man is all about family ties, mental ability and crossing the boundaries of ‘legal’ in Vegas.

And film fans might recognize the below scene used in another popular Vegas film The Hangover.

“So, what are you doing in Las Vegas?” – Iris
“We’re counting cards” – Raymond